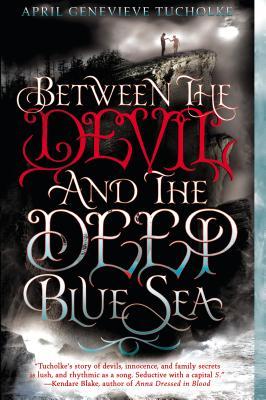 Title: Between the Devil and the Deep Blue Sea

You stop fearing the Devil when you’re holding his hand…

Nothing much exciting rolls through Violet White’s sleepy, seaside town… until River West comes along. River rents the guesthouse behind Violet’s crumbling estate, and as eerie, grim things start to happen, Violet begins to wonder about the boy living in her backyard. Is River just a crooked-smiling liar with pretty eyes and a mysterious past? Or could he be something more? Violet’s grandmother always warned her about the Devil, but she never said he could be a dark-haired boy who takes naps in the sun, who likes coffee, who kisses you in a cemetery…who makes you want to kiss back. Violet’s already so knee-deep in love, she can’t see straight. And that’s just how River likes it.

It’s been awhile since a book has made me this angry, but I guess it was about time for my luck to run out in that respect.  I’m having trouble pinning the exact source of my anger and frustrations on any one aspect of the novel.  Instead, it consisted of multiple, small components that irked me and ultimately contributed to a snowball effect that led to my strong overall dislike of the novel.

The premise was eery, intentionally misleading (in a good sense), and riddled with holes and ambiguity.  Any book that contains a fictional universe or subset of the world requires adequate explanation and description, both of which were severely lacking in Between the Devil and the Deep Blue Sea.  Therefore, it was challenging to make sense of several major events, even after completing the novel in its entirety, causing me to become progressively more confused as I advanced.  The majority of questions raised remained unanswered by the conclusion of the work, and the ominous powers possessed by some of the characters remained equally obscure, despite their prominent role in the overall plot.

Another of my complaints was the excessive objectification and oppression of both women and the vulnerable (ie. children).  Both subsets of characters, as well as the protagonist, Violet, were repeatedly “controlled” both physically and emotionally against their wills, primarily without awareness or knowledge of such manipulations.  During most of the circumstances under which this occurred, this usurpation of an individual’s freedom of speech and actions was not justified, highlighting the apparent frailty of such individuals. On multiple occasions, this “ability” was utilized by River to create and dominate a physical, romantic relationship.  Although I do not believe this was Tucholke’s intent, I found this scenario to be highly disturbing, above and beyond the typical creepy nature of young adult thrillers.

The novel is advertised as a “gothic thriller romance” on the back cover, and while the gothic and thriller descriptions certainly held true, there was minimal romance.  The romantic interactions that were present, however, appeared forced and awkward, in addition to being characterized by the oppression of  women that I highlighted in the previous paragraph.  These components never extended beyond prolonged kissing, which hardly qualifies this as a work within the genre of romance.  It’s generally challenging to incorporate a romantic relationship into a horror novel, and I this book certainly upheld and attested to this generalization.

Similarly, while the characters were well-developed with detailed backstories, their initial presentations were less than ideal.  Each time a new character was introduced, Tucholke either revealed everything there was to know about that individual or absolutely nothing.  Both sides of this spectrum were equally frustrating and often prevented further characterization as the novel progressed.  While it is understandable that she wished for some of these characters to be shrouded in mystery upon their arrival in Echo, Tucholke took this to an extreme, revealing nothing about their true personalities and pasts until the conclusion of the novel.  River was a prime example of this, and his compulsive lying served to further complicate and confuse matters.  Even after his childhood experiences were revealed, I, as a reader, continued to question these events due to the previous untruths he had recounted.

Furthermore, the first person narration from Violet’s perspective portrayed her as extremely disconnected from the world around her.  Each decision she makes, from her choice in clothing (all of which appeared to be raided from her dead grandmother’s closet) to her brilliant idea to rent out the guesthouse to a complete stranger and to consequently trust said stranger, call into question her sanity as well as reliability.  Her naivety and lack of common sense are constantly highlighted throughout the novel and nearly cause her demise on several occasions.  Not only does she throw all concern for her own life out the window, she also appears nonchalant and distant from her twin brother and best friend, conducting highly one-sided relationships with each.  Her style of narration was…painful to say the least:

He was barefoot again. He didn’t like to wear his shoes. Which I liked because I liked his feet.

He wasn’t wearing any socks, and he had nice feet, especially for a boy—strong and tan and smooth and beautiful, you almost couldn’t call them feet anymore.

I’m still uncertain as to whether this statement was intended to convey that she had a foot fetish or to further emphasize her peculiar personality.  To add even further fuel to the fire, Violet’s mind appeared to change with the wind, contributing to her overall wishy-washy personality.  I absolutely cannot stand indecisive protagonists, which certainly didn’t aid my enjoyment of the novel or lack thereof.

Lastly, Tucholke’s writing style conveyed the reservations and inexperience of an individual who is unaccustomed to composing horror literature.  She tried too hard to conceal specific details regarding events and characters, which immediately drew reader attention to those areas.  Additionally, in attempting to drop the occasional clue, she managed to make these revelations incredibly obvious.  Picture a spotlight, some big blinking signs, and an announcer calling out: “Pay attention to this!  It’ll be important in a few chapters!”  Consequently, subtlety was not her strong suit throughout this book, leaving little for readers to speculate and puzzle over.

All in all, Tucholke needed to exert less time and energy on the failure of a romance and instead divert this attention toward elaborating upon the novel’s premise and the characters themselves.  While the cover’s an eye catcher, it was the most intriguing component of the novel for me.  I felt no connection with or empathy for the characters at any point, further contributing to my dislike of the work.  Needless to say, I’m not feeling particularly motivated to continue on in the series.

Olivia
I am a senior in high school and an avid reader/reviewer, horseback rider, and graphic designer.  Since a young age, I have fostered a love of reading, beginning with my forays into the Nancy Drew series.  I’ve branched out significantly in my reading tastes since then, and my favorite genres include young adult, romance, mystery, and thriller.  I’m constantly trying to expand my horizons, however, so I do dabble in other genres.  While I’m not reading, I volunteer at a hippotherapy center and a veterinary clinic, practice agility with my dogs, play piano and guitar, and sketch.
Connect With Me:
goodreads • pinterest • instagram • tumblr

4 thoughts on “Review: Between the Devil and the Deep Blue Sea”