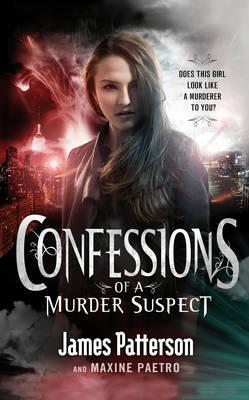 Title: Confessions of a Murder Suspect

On the night Malcolm and Maud Angel are murdered, Tandy Angel knows just three things: She was the last person to see her parents alive. The police have no suspects besides Tandy and her three siblings. She can’t trust anyone -— maybe not even herself.

Having grown up under Malcolm and Maud’s intense perfectionist demands, no child comes away undamaged. Tandy decides that she will have to clear the family name, but digging deeper into her powerful parents’ affairs is a dangerous — and revealing — game. Who knows what the Angels are truly capable of?

Despite reading Patterson’s Maximum Ride series when I was younger, I have never associated him with children’s literature or even the young adult genre.  To date, my mind immediately jumps to adult/mystery novels that often revolve around brutal murders whenever I come across his name.  Therefore, I was rather taken aback when I discovered that he had written a “crime” series geared toward a teenage audience and was mildly apprehensive about his approach to the subject material.

While what I read was quite far from my initial expectations in terms of gory details and sinister plots devised by completely deranged antagonists, the novel as a whole seemed oversimplified and outright boring (which is highly impressive considering that several characters were brutally murdered throughout the course of the novel).  Despite Patterson’s undeniably excellent writing, he appeared to struggle to connect with his intended readers, constructing a narrator and plot that would appeal to much younger, child-like audience as opposed to the young adult/teen crowd to which the series was marketed.  The novel, unfortunately, didn’t contain Patterson’s typical, complex plot with a wide range of twists and turns.  Instead, the murder itself and the evidence presented throughout the book were rather lackluster and unimpressive, and the solution to the “crime” was not well concealed.  I was hoping for a mystery of significantly greater complexity and overall substance but was disappointed in this respect.

Patterson attempted to weave together too many plots simultaneously and it didn’t work.  Whatsoever.  While many of the characters were involved in several of these unfolding series of events, there were no apparent connections or associations between the plots themselves – they almost appeared as completely separate entities.  The majority of the characters had no idea what was transpiring at any given moment, and as a reader, I was equally, if not more, confused.

The teenage protagonist and narrator, Tandy, was repeatedly on my nerves due to her obstinate unwillingness to act her age.  Her thoughts and behavior mirrored those of an unruly toddler whose favorite word is “mine.”  She conveyed a highly self-centered perspective throughout the novel and, prior to acting, would only question the immediate repercussions of these decisions and how they would impact solely her.  She failed to consider the interests and wellbeing of those around her, including her remaining family members.  After the death of a loved one, families often become closer, but Tandy had a tendency to push hers away, despite their good-intentions and warranted concerns.

Furthermore, Tandy constantly assumed a know-it-all attitude, particularly in the presence of her superiors.  While intelligent, her age and overall lack of life experiences rendered her in no position to belittle and speak down to police inspectors as well as her elders.  It would have been nice to see someone shut her down on at least one of these occasions because she certainly could have used an ego-check.  Or perhaps she just had a burning aspiration to become Nancy Drew’s successor…  She also had an aggravating habit of going off on completely unrelated tangents with no connections to past, present, or future events.

The remaining characters were equally flat, and quite a few of them had ongoing psychiatric illnesses that likely should have been addressed.  They appeared alarmingly emotionless, and their reactions or lack thereof to the various murders was equally concerning.  Lastly, there was no characterization – the characters maintained the same personalities, traits, and mindsets for the duration of the novel with minimal variation.

The conclusion also served as a letdown.  The solution to the mystery was rather lousy and unimpressive.  Considering this was the first installment of a multi-book series, I was expecting a significant cliffhanger which was…nonexistent.  There were very few questions that were left unanswered, and I felt no emotional connection to any of the characters.  There was absolutely no incentive for me to continue reading the series above and beyond the fact that I had already checked the next book out from the library.

Olivia
I am a freshman in college and an avid reader/reviewer, horseback rider, and graphic designer.  Since a young age, I have fostered a love of reading, beginning with my forays into the Nancy Drew series.  I’ve branched out significantly in my reading tastes since then, and my favorite genres include young adult, romance, mystery, and thriller.  I’m constantly trying to expand my horizons, however, so I do dabble in other genres.  While I’m not reading, I volunteer at a hippotherapy center and a veterinary clinic, practice agility with my dogs, play piano and guitar, and sketch.
Connect With Me:
goodreads • pinterest • instagram • tumblr

5 thoughts on “Review: Confessions of a Murder Suspect”