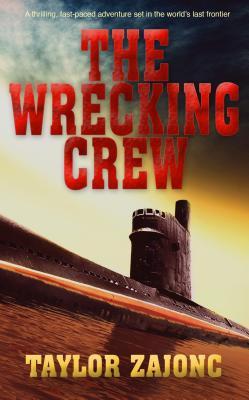 In exchange for his freedom from a secret Moroccan prison, deep-water salvage diver Jonah Blackwell agrees to lead a covert search for a missing research team in the dangerous coastal waters of Somalia, an area plagued by pirates and a deadly red tide killing all marine life within its reach. But when his expedition threatens the ambitions of billionaire industrialist Charles Bettencourt, Jonah’s survival depends on hijacking a hostile submarine and assembling an unproven crew who must simultaneously investigate the source of a mysterious oceanic plague and face down Bettencourt’s commandos.

I received a free copy of this book from the author in exchange for an honest review.

The summary had me mildly apprehensive regarding the legitimacy and realistic nature of the plot, along with some concerns of the mysterious mention of pirates, but the majority of these concerns were quickly invalidated as I began to read.  While there were quite a few instances of characters being in precisely the right place at the right time, none of the characters magically developed the ability to fly or were able to hop up and rejoin the fight after a mortal blow.  The plot was fast-paced and exciting, and there were a number of unforeseen twists and turns that kept me on my toes (either that, or I’ve suddenly become horrific at guessing where the plot is headed).

I have fairly limited knowledge regarding ships, submarines, and the sort, as well as warfare/weaponry due to my limited (ie. nonexistent) personal experiences in these areas.  While I initially had some reservations about the highly technical terms and descriptions that were provided throughout the text, I was able to infer the purposes of many of these items.  While I have no doubt that my inferences were slightly off the mark to say the least, I was still able to grasp a basic understanding of how they would play out in the plot moving forward.  When in doubt, I assumed any fancy word referred to a weapon.  If potential weapon was in the hands of the protagonists, that was good; if the weapon was being aimed at the protagonists, that was bad – and there you have my highly technical description.

I particularly enjoyed the wide range of antagonists and the cunning tactics that they continually devised to oppose Jonah and his companions.  They were determined, to say the least, and they put up a formidable fight.  Zajonc avoided many of the stereotypical pitfalls of antagonists by ensuring that they were not always victorious or always unsuccessful in their endeavors.  Like the protagonists, Charles Bettencourt and his henchmen underwent their fair share of disappointing defeats, as well as triumphs, adding a realistic dimension to the novel.

One of my only complaints was the surprising and excessive naivety of nearly all of the characters.  While everyone has their moments of weakness, the characters that Zajonc portrayed seemed particularly unlucky in this respect.  The majority of them were extremely trusting of complete strangers, completely disregarding one of the principle rules all small children can recite: never talk to strangers.  Despite traversing one of the most dangerous oceanic regions in the world, the characters seemed unfazed by the potential for each new individual to be a pirate or employed by the antagonist.  This misplaced trust led to several unfortunate yet easily avoidable encounters.  The characters never learned from these mistakes either, which made them that much more frustrating.

I was also disappointed regarding the relative lack of romance, although I’m going to blame this on the book’s categorization as an action novel – if I had been looking for a romance, I would have selected another book entirely.  While Zajonc introduced the possibility of several relationships, none of them were further developed above and beyond some initial feelings and a few awkward encounters.  Since Zajonc went to the trouble to establish these sparks, I would have liked to see how the relationships would have evolved throughout the course of the novel.  Then again, I imagine one doesn’t have ample amounts of time to devote to dating while trying to outrun pirates and a nefarious corporation.

Overall, I was immediately hooked by the compelling characters and plot, as well as the fluid, comprehensive writing style.  This was a fairly quick and refreshing read for me, particularly after the slew of one and two star ratings I’ve been assigning recently.  And while there is no promise of any additional installments, I would unquestioningly pick them up in a heartbeat.

Olivia
I am a senior in high school and an avid reader/reviewer, horseback rider, and graphic designer.  Since a young age, I have fostered a love of reading, beginning with my forays into the Nancy Drew series.  I’ve branched out significantly in my reading tastes since then, and my favorite genres include young adult, romance, mystery, and thriller.  I’m constantly trying to expand my horizons, however, so I do dabble in other genres.  While I’m not reading, I volunteer at a hippotherapy center and a veterinary clinic, practice agility with my dogs, play piano and guitar, and sketch.
Connect With Me:
goodreads • pinterest • instagram • tumblr