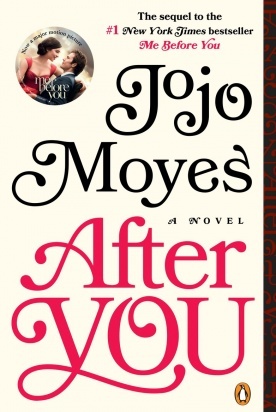 Series: Me Before You

How do you move on after losing the person you loved? How do you build a life worth living?

Louisa Clark is no longer just an ordinary girl living an ordinary life. After the transformative six months spent with Will Traynor, she is struggling without him. When an extraordinary accident forces Lou to return home to her family, she can’t help but feel she’s right back where she started.

Her body heals, but Lou herself knows that she needs to be kick-started back to life. Which is how she ends up in a church basement with the members of the Moving On support group, who share insights, laughter, frustrations, and terrible cookies. They will also lead her to the strong, capable Sam Fielding–the paramedic, whose business is life and death, and the one man who might be able to understand her. Then a figure from Will’s past appears and hijacks all her plans, propelling her into a very different future. . . .

For Lou Clark, life after Will Traynor means learning to fall in love again, with all the risks that brings. But here Jojo Moyes gives us two families, as real as our own, whose joys and sorrows will touch you deeply, and where both changes and surprises await.

I was shocked when Me Before You blew me away. I had finally stumbled across a five-star read in one of my least favorite genres. After that unexpected turn of events, picking up After You was a no-brainer. I was also incredibly curious as to how the characters would rebound and the plot would unfold following the tear-wrenching conclusion of Me Before You. Unfortunately, my excitement was almost immediately dashed. What I predicted would be a guaranteed page turner was quickly transformed into a disappointing let-down which I had to force myself to finish.

Me Before You and After You feature many of the same characters, but the similarities between the two stop there. After You lacks the witty dialogue and charming relationship that characterized Me Before You. Instead, these are replaced by a helpless, broken protagonist who refuses to help herself and a mediocre, half-hearted relationship that pales in comparison to that between Will and Lou. I sorely missed their unique dynamic and light-hearted banter. Lou’s new romantic interest is a forgettable, stereotypical romance novel character, as well as a sorry substitute for her former lover. To compound matters, their relationship felt incredibly forced and there was no evident chemistry between them. One of the most eloquent and emotional aspects of Me Before You was converted into one of the largest detriments of After You.

Me Before You was a rare character-driven novel that I enjoyed, and I was readily connected with the protagonist. Instead of portraying the bubbly, enthusiastic Louisa Clark that I had come to love, After You depicted her as a shell of her former self. All of her character development in Me Before You was unceremoniously tossed out the window. Instead of continuing to grow following the conclusion of Me Before You, she regressed to her meek, pre-Will self, which she embodied for the entirety of this second installment. After watching her character transformation in Me Before You, it was both heartbreaking and frustrating to see her so static and helpless. Her refusal to learn or grow from her past experiences was equally aggravating, and she did very little to help her own cause.

I can’t stand the portrayal of children and teenagers in literature, and Lily was no exception. Her classic absentee parents and rebellious behavior grew old very quickly. For an individual who wanted something from Lou, she was incredibly ungrateful and inconsiderate. Lou fed into this pattern of behavior by serving as a docile doormat, doing nothing to intervene or put an end to Lily’s behavior. Furthermore, the sub-plot surrounding Lily felt far from authentic. Despite serving as one of the only notable events in the entire novel, it came across as an outlandish, out-of-the-blue concoction that Moyes incorporated purely for shock value.

All in all, I had trouble identifying the true purpose of the novel. It lacked a compelling plot as well as character building, consisting of a few unimportant and seemingly disjointed sub-plots. These diversions added little to the characters or their stories and came across as filler. I was particularly disenfranchised with being beaten over the head with feminism by Lou’s mother.

One of the only redeeming qualities for this book was the beautiful, flawless writing, which elevated my otherwise one-star rating to two stars. Jojo Moyes is an incredibly talented author and has a way of weaving raw emotion into her works. While I’m uncertain if I’ll continue on with this series, I’m eager to read some of Moyes’ other publications.

Undoubtedly, the overwhelming success and public acclaim of Me Before You was a challenging act to follow. I wanted to fall in love with After You just as I had with the first installment, but it fell considerably short of my expectations. While this book in no way tarnished my opinion of Me Before You, I wish I hadn’t continued on with the series. Me Before You was a phenomenal standalone and should have remained as such.