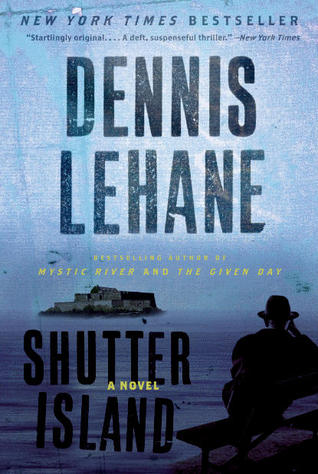 The year is 1954. U.S. Marshal Teddy Daniels and his new partner, Chuck Aule, have come to Shutter Island, home of Ashecliffe Hospital for the Criminally Insane, to investigate the disappearance of a patient. Multiple murderess Rachel Solando is loose somewhere on this remote and barren island, despite having been kept in a locked cell under constant surveillance. As a killer hurricane relentlessly bears down on them, a strange case takes on even darker, more sinister shades—with hints of radical experimentation, horrifying surgeries, and lethal countermoves made in the cause of a covert shadow war. No one is going to escape Shutter Island unscathed, because nothing at Ashecliffe Hospital is what it seems. But then neither is Teddy Daniels.

Before I get started, I have to admit that I broke one of my cardinal rules with Shutter Island: I watched the movie adaptation prior to reading the book. In the moment, it sounded like a great idea. In hindsight, I wish that I had waited to watch the film. Due to my impatience, I was already privy to a few of the twists and turns and the jaw-dropping conclusion before I read the opening sentence of the novel. While I hadn’t seen the movie in a few years and the details had grown a bit fuzzy, I was worried that the book would never live up to its screen adaptation or my considerably heightened expectations. I wasn’t prepared to have one of my favorite thriller movies tainted by a less than pleasant reading experience when I finally decided to pick up its source material. Hence my surprise and utter shock when I was completely blown away by Lehane’s masterfully crafted tale.

Without a doubt, my favorite aspect of the novel was its capability to immerse me in the story while simultaneously setting up the details and scenes necessary to pull the rug out from underneath me. My rudimentary, somewhat hazy knowledge of the plot prompted me to seek out clues and inconsistencies in the narrative and sequence of events that were hinting at the book’s concluding twist. Despite making a conscious effort to search for these revealing details, I was completely oblivious to a few of them until they were referenced and further elaborated upon later in the book. Lehane brilliantly disguised many of these clues, and I can say with certainty that I wouldn’t have picked up on a single one if I went into this book with no knowledge of the plot or the final twist. His capability to develop a multidimensional and complexly layered plot is unparalleled, and he taunts readers by sticking information right under their noses without drawing attention to the gradual buildup to the concluding scene.

The ending itself, particularly the final three pages of the novel, was riddled with ambiguity and sparked a multitude of additional questions. Personally, I found the conclusion in the film to be much more straightforward and clear-cut, with little room for personal interpretation. The book’s closing couldn’t be more dissimilar, and I preferred Lehane’s confusing, somewhat convoluted, and considerably more thought-provoking approach to wrapping up the story. Lehane didn’t spoon-feed you the ending he thought that readers were looking for or expecting. Instead, he utilized the final chapters in the book as an opportunity to further disorient and bewilder his audience. Despite having spent the past 20 pages convincing readers of a certain “truth,” Lehane’s conclusion that follows causes you to question all of the information that was just revealed. Just when you thought that you had it all figured out, you receive one final curveball of an ending, and I couldn’t imagine a better way to close the tale. This type of approach would seem out of place and jarring if incorporated into the conclusions of the majority of modern thrillers, but it works well alongside the other stylistic and thematic components that have been interwoven into Shutter Island’s narrative.

From the outset of the novel, it was immediately evident that Lehane invested considerable time and energy into conducting research before he began writing. He had sufficient background knowledge to construct a convincing tale revolving around mental illness, psychological disorders, and the treatment of the “criminally insane” during the early to mid-1900s. These insights enabled Lehane to create multifaceted, realistic characters who came alive on the page. He readily portrayed individuals who were riddled with flaws and haunted by past events, casting many of their decisions and motivations in a questionable, morally-grey light. I appreciated the extra depth that this added, particularly with respect to the narrator, and it played a considerable role in my emotional investment in the tale. The witty dialogue and unexpected one-liners may also have had something to do with this…

Ultimately, Lehane walked a fine line between revealing all of his cards and leaving readers utterly in the dark. Lehane is an incredibly talented writer, and he was able to seamlessly tie together all of the complex aspects of this novel while simultaneously toying with his audience. His ability to deceive readers and disguise information in plain sight was both unique and refreshing, and the premise and plot that he created were highly original. The creepy, sinister tone further contributed to the book’s air of mystery and confusion – as further information was uncovered, I felt like I knew even less than I had originally, and my list of questions continued to grow exponentially as the work progressed. Shutter Island captivated me from the first sentence, readily surpassing my extremely elevated expectations stemming from the film, and it has rightfully earned its place among my favorite thrillers of all time.

I’m a 21 year old college student with a love of reading and a high tolerance for caffeinated beverages. When I’m not wrapped up in my pre-medical coursework, I’m usually engrossed in a fantasy or psychological thriller, interspersed with the occasional young adult novel.